Redskins Construct Monument To Past Failures 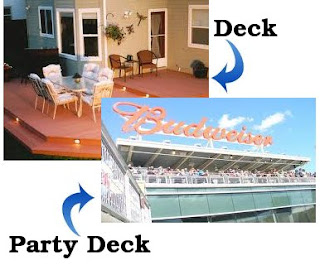 The word “deck”, by itself, may not do much for you. It might conjure up some thoughts of a warm summer breeze, a simmering grill, the taste of a chilled beverage or maybe a plastic chair that reclines to just the right spot. A smile might appear on your face for the most brief of seconds before the thought of a small oasis slips your mind. Now precede that word with “party” and we have turned what once was a tiny utopian thought into a mission. A call to action that demands friends rise up crack open a beer and throw caution to the wind. A “Party Deck” is a destination of purpose, a means to let loose, speak loudly, eat horribly, dance terribly, and have FUN. It is nearly impossible for the combination of these two words to develop into a single negative thought. Unless of course the Party Deck is located at FedEx Field.


FedEx Field is a monstrosity. A throwback, if you will, to the old style bowl stadiums. By the time Jack Kent Cooke found a spot to break ground the deisgn was already 10 years obsolete. Without consideration for viewing angles or HD screens the stadium was thrown up in almost record time. When Dan Snyder took over, little changed. With a rabid fan base the new owner had design teams adding seats to every conceivable spot in the stadium, including obstructed view seats behind support pillars. While criticisms surrounding most of these decisions were in no short supply the Redskins always possessed the magic trump card, sellouts. Every seat for every game was accounted for and the wait-list was reportedly near 160,000 deep. Fans were obviously fine with the accommodations of FedEx Field.

Then something happened. On national television in 2008, in front of a crowd 90,512 strong the Redskins, 6-2 at the time, lost to the Pittsburgh Steelers 23-6. The loss, which was the start to a 2-6 finish for the Redskins, showed America that a visiting team could take over Washington’s home. Black and gold filled sections of the stadium, Steelers chants could be heard on the broadcast and Jason Campbell had trouble communicating signals at the line of scrimmage. The loss exposed the franchise for what it had become, a marketing machine for a mediocre product with a depleting fan base.

Exposed, management started to introduce a flurry of changes. Cerrato resigned was sent packing, a new PR director was hired, Shanahan was brought in and club seats were transformed into standing room only tiers. On the surface Snyder attempted to show that change had come to Washington. At the core of the organization however it was business as usual. The team continued to trade draft picks for under-performing veterans and just for good measure filed lawsuits against fans and the media.

Fed up with a losing product and the explanations excuses Snyder and the Redskins continue to use year in and year out for running a once great franchise into the ground, fans simply stopped buying tickets. Which finally brings me back to the Party Deck.

The Party Deck is nothing more than a symbol for everything the Redskins have done wrong. The organization is passing the change off as an upgrade and as an answer to patrons’ cries for a fan friendly stadium. In reality it is the result of making over a decade’s worth of terrible football decisions. As a former season ticket holder I have no doubt that with a winning team FedEx Field would be full of burgundy and gold every week, no questions asked. But fans have become frustrated and have lost hope in Snyder’s ability to figure out how to put a consistent winning product on the field. To cover for his failures Snyder must now remove seats to keep the stadium full. Maybe I’m just in a bad place right now, but every time I look at the gaps at each end of the FedEx Field the only thought that will come to my mind is how they never should have existed. They will forever be a monument to past failures of the organization.

In an interview on ESPN 980 Lon Rosenberg described the removal of these seats as a necessity because they “... are seats that [fans] were not wanting to buy, and they were asking to be kept on the waiting list ‘til better seats opened up.” I guess That’s what happens when fans cling to those obstructed view seats for generations and generations, right Lon? Maybe they are actually waiting for you to put a product on the field that is worth paying to see.
By Unknown - 7/17/2011 08:23:00 PM