According to Puck Daddy, Ken Klee who was drafted 177th overall by the Washington Capitals in 1990, "has told his family he's retiring." Drafted at the age of 19 Klee played 3 seasons in the CCHA for the Bowling Green Falcons then in the AHL for another 3 seasons for both the Baltimore Skipjacks and the Portland Pirates before being called up by the Capitals in the 1994-95 season. Klee was a hard hitting and strong stay at home defenseman who roughed up any opposing player trying to enter the Capitals zone. In his 9 seasons as a Capital, Klee's hard hitting helped Washington make playoffs 6 times including the 1997-98 run when the Caps were swept by Detroit in the Stanley Cup Finals. Klee did not put up a lot of points, but his ability to lock down opposing forwards kept him on the ice for 20 minutes a game. Sounds like the kind of player the Caps could use for the upcoming 2009-10 season.

More important than any of this however is that as a young puck head I got to meet Ken Klee at the Chesapeake Bagels that used to exist in Crofton, just down the road from Piney Orchard where the Capitals used to practice. I still have the bagel bag he signed for me that day: 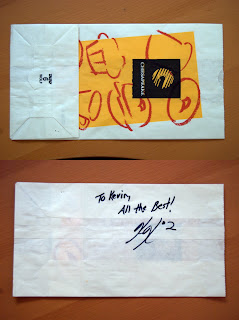